Tikku & Takku II are made for preliminary schools teachers and producers of educational materials. You can produce both print and cursive examples for pupils using Tikku & Takku II both on MacOS or Windows.

Fonts are based on the Finnish standard for preliminary schools. 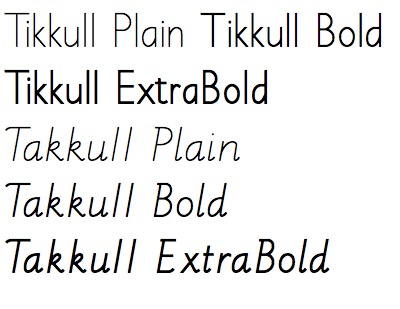 From November 2011 the handwriting font package includes also extreme easy to use OpenType font SujuvaOT, that produces all the joints in fluent handwriting automatically.

In this package there are sixteen typefaces, a half are ordinary and a half with ledger lines. Using these typefaces you can prepare writing exercises, educational materials and print them on any printer. Tikku & Takku II fonts include also all Latin1 characters.

Tikku & Takku II font package includes also an new SujuvaOT OpenType Font, that applies a new technology for building joint in handwriting. This font has a normal and bold face.

The handwriting font package includes also an older typeface Sujuva for fluent handwriting. This is for those, who can't use SujuvaOT. It has a lot of joints for joining characters together nicely. You need not to add joints manually, because the typeface package include also macros for MS Word and LibreOffice/OpenOffice, which build binding joints for you.

JL-types Ky offers for Tikku & Takku II users to obtain inexpensively SujuvaOT update. It costs only a third of a normal price of the font package.